With her trademark long ponytail and cute cat ears headband alone, Ariana Grande could elicit screams of delight from her adoring crew of fans who call themselves Arianators. Ariana Grande is all set to give back all the love to her fans as she mounts and announces her 'come back' tour that will surely be sweet music in the ears of her ever-solid fanbase. The North American leg of the "Sweetener" World Tour will bring the 'Thank U Next' singer to the grand stage of the MGM Grand Garden Arena on Sunday 15th December 2019. It is a fact that demands for tickets to this show are currently on an all-time high. Act quickly! Booking your tickets could happen right here, right now. Click that 'buy tickets' button and walk away with a ticket and a big smile. Now ain't that really sweet?! 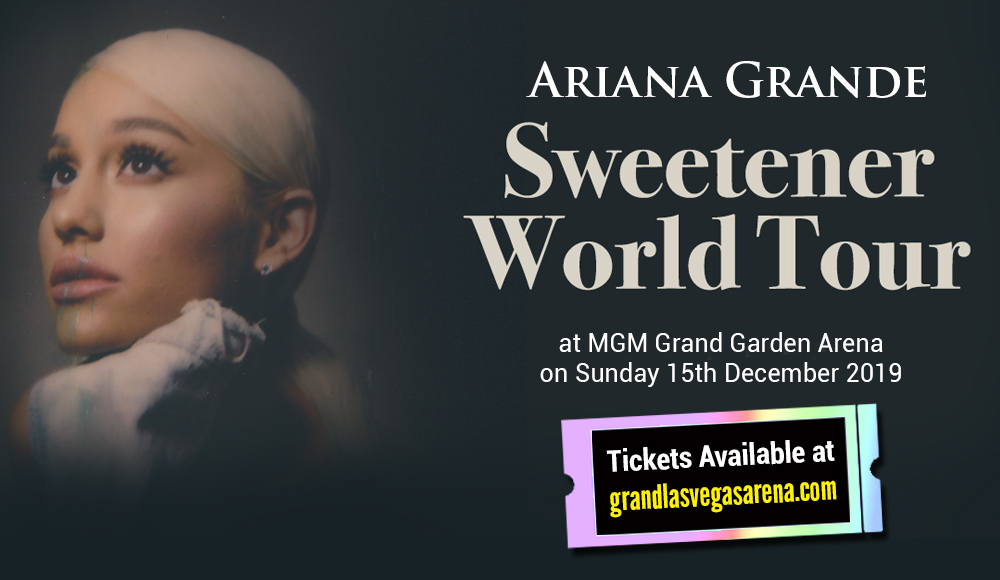 Everyone who's been following her career and major new headlines are aware that Ariana's touring stint has slowed down for a while following the unfortunate Manchester incident. Fans were concerned if she would ever tour again but gave the pop superstar an overflow of love and understanding. Ariana Grande has gone through a dark place and some rough patches, but she is a truly a star who naturally sparkles and shines, especially for her fans. This year as she embarks on her "Sweetener" World Tour, Ariana herself brims with gratitude, resilience and positivity. “It’s a dream come true. no matter how hard it gets or how many feelings come up that are screaming at me to be processed and sorted through one day, I’m grounded by gratitude and promise not to give up on what I’ve started. I feel everything very intensely and have committed to doing this tour during a time in my life when I’m still processing a lot … so sometimes I cry a lot!”

Ariana Grande has been on the limelight almost all her life. Her music career is fully decorated with citations and accolades. She has 5 multi-platinum albums to her name, plus singles that garnered over 30 billion streams on platforms like YouTube, Spotify, and Apple Music and is the most listened female on the latter two. She has a collection of one Grammy Award, one Brit Award, two Billboard Music Awards, and three American Music Awards. As a public figure, she is one of the most influential figures on social media, being the most followed woman on Instagram. Forbes ranked her amongst the highest-paid celebrities in 2019, and Time named Grande as one of the 100 most influential people in the world in 2016 and 2019. Billboard recognized her as the "Woman of the Year" in 2018.

How could you pass up on such a phenomenal artist? Make this an Instagram-worthy moment that your friends would be liking and reacting to endlessly! Ariana Grande is a must-see!