Country fans, are you ready for Carrie Underwood?? With special support from Maddie and Tae & Runaway June, she’s bringing the Cry Pretty 360 tour to the MGM Grand Garden Arena on Saturday 11th May 2019!! Tickets are on sale now and expected to disappear fast – get ‘em while you can!! 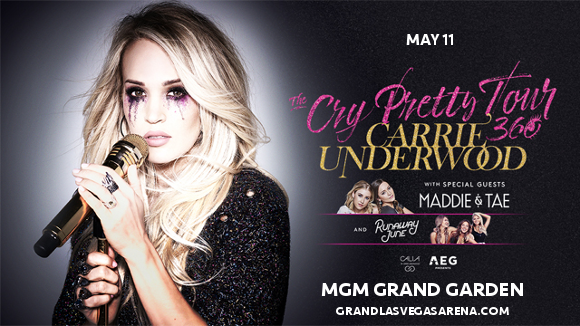 With the touring lineup consisting of Maddie and Tae and Runaway June in addition to Carrie herself, the Cry Pretty 360 tour features only women. The unusual all-female lineup is following a recent positive trend, with fellow country stars Miranda Lambert, Maren Morris and Kacey Musgraves having mostly or all-female lineups on their respective headlining tours recently. It’s been much-needed, in a year when no women were nominated for the ACMS.

Get ready to experience that wonderful unity and togetherness for yourself, live!! What are you waiting for?? Get those tickets while you can!