Green Day & Against Me! Tickets

Punk rock fans get ready for the biggest event of the year; Green Day are going on tour with their massive new album, and they'll be accompanied by fellow pop-punk act Against Me! The Revolution Radio tour, spanning a huge number of dates across North America, will see the two bands land in the MGM Grand Garden Arena on Friday 7th April 2017. Tickets will disappear FAST for this event so be very speedy about getting yours!! 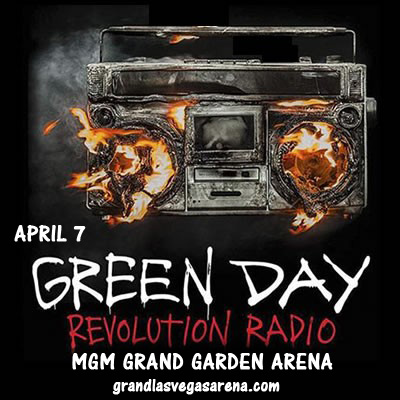 On tour in promotion of their freshly released 12th album, “Revolution Radio,” the legendary pop-punk trio, comprised of frontman Billie Joe Armstrong, bassist Mike Dirnt, and drummer Tré Cool, have been going strong for just over 30 years, and remain as rebellious and angsty now as they did in the year of “Kerplunk” in 1991. Their political message resonates more with the general public now than ever, as does the theme of their most recent album, and their choice of support act, the outspoken and bold punk rock band Against Me!

The tour with Green Day marks a high point in the band's already highly successful career, carrying personal as well as politital and musical significance for the band members.“Green Day was the first show I ever went to,” Against Me singer Laura Jane Grace said, revealing her enthusiasm and excitement regarding the upcoming series of shows. “So to be going out with them for a proper tour is pretty monumental…I’m just really honored, humbled and stoked that they asked us.”

What are you waiting for? Tickets aren't going to sit around – get yours NOW!!