One of the world's most famous entertainers, Hugh Jackman, comes to MGM Grand Garden Arena on Saturday 13th July 2019 on his world arena tour, The Man. The Music. The Show., which will see the star performing songs from the hit musicals Oklahoma!, The Boy From Oz, Les Miserables, The Greatest Showman and more! Tickets will sell fast for this multi-award-winning Broadway luminary, so book now to avoid disappointment! 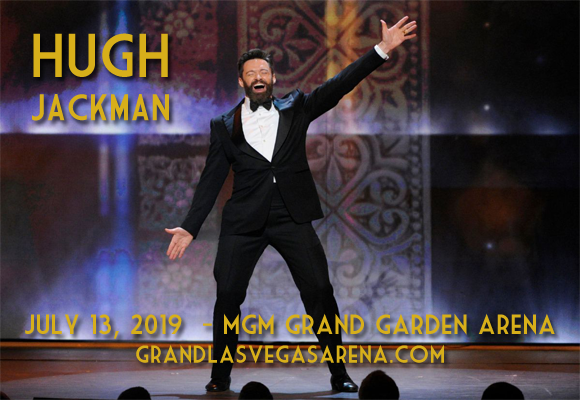 Tony, Emmy and Golden Globe Award-winning and Academy Award-nominated Australian actor, singer, and producer Hugh Jackman is best known for his role as Wolverine in the X-Men films. Jackman began his career upon graduating from the Western Australian Academy of Performing Arts of Edith Cowan University in Perth, Western Australia. In 1994, on the day of his final Academy graduation performance, Jackman received a phone call offering him a role on Australian ABC TV series Correlli, which ran for one season. After the series ended, Jackman began his stage career, and in 1998 he played the leading role of Curly in the Royal National Theatre's acclaimed stage production of Oklahoma! in London's West End, introducing him to an international audience. His big break came in 2000, when he was cast in the role of Wolverine in Bryan Singer's X-Men. Over the years, Jackman has been cast in many varied and notable films, including:  Kate & Leopold (2001), Van Helsing (2004), The Prestige (2006), The Fountain (2006), Australia(2008), Les Misérables (2012), Prisoners (2013), and The Greatest Showman (2017). In 2004, Jackman won a Tony Award for his role in The Boy from Oz, and his extensive stage repertoire saw him star in three one man shows in 2011: Hugh Jackman: In Performance, Hugh Jackman: In Concert and Hugh Jakcman: Back On Broadway.