EVENT CANCELLED. Please contact your ticket point of purchase to claim a refund on your tickets.

Not bad at all for a guy who used a rap name generator app. This name has gone to him to the high places. Indeed Post Malone is the name you've been seeing these days high up the charts and on everyone's playlist. Now that name is also you'll get to see up in neon lights at the marquee of none other than the prestigious MGM Grand. Save the date and lock-in those tickets as Post Malone will come cruisin' with his 'Runaway tour' at the MGM Grand Garden Arena on Saturday 14th March 2020. This is getting everyone up in arms trying to grab this hot ticket. Just let your fingers to the work by clicking on that 'buy tickets' link on this website. Act before those tickets runaway… 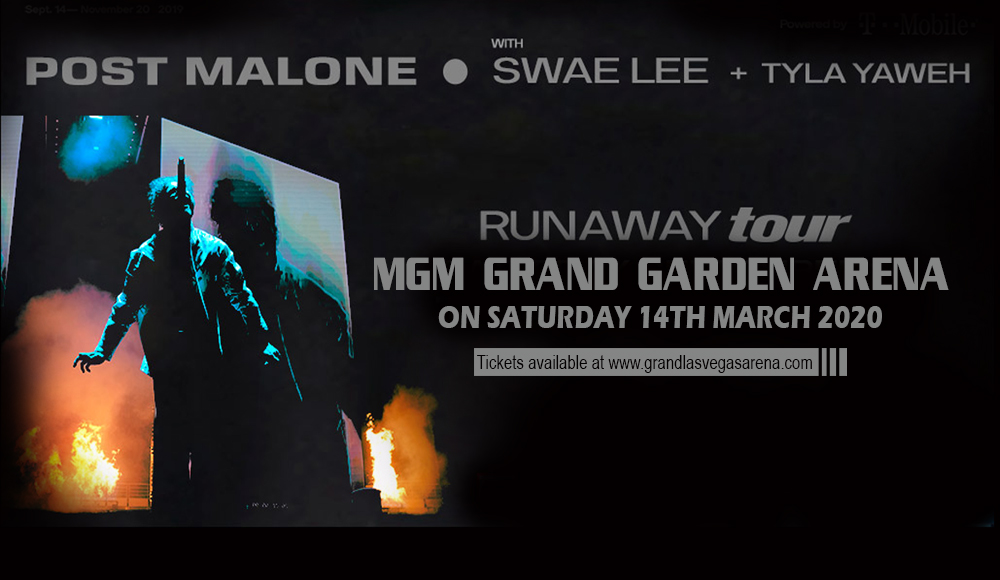 With Billboard chart-toppers firmly tucked under his belt, namely, "Stay," "Leave," "Go Flex," "White Iverson," "Sunflower," "Rockstar", "Congratulations", and so much more, it comes without a doubt that Post Malone is one of the most streamed and most-listened-to artists these days.

It took a while for Malone to find his sound after going through a few career mishaps, moving from emo to hard rock and, finally, to hip-hop. Post Malone used this to his advantage in coming up with a sound which critics hailed and the press describing it as a "melting pot of the country, grunge, hip-hop and R&B". His no-frills vocal style has been described as laconic. Jon Caramanica of The New York Times described Post as "an artist who toes the line between singing and rapping, and hip-hop and spooky electric folk".

Post Malone's versatility as taken him to great heights. This diamond-certified GRAMMY® Award-nominated phenomenon smashed records like there's no tomorrow. His delivery of the diamond-selling “Congratulations” [feat. Quavo], spawned back-to-back #1 debuts on the Billboard Top 200, where he scooped up countless multiplatinum certifications around the world. By coveting nine spots in the Top 20 of the Hot 100, clinching “the most songs in the Top 20 of the Hot 100, he crushed a record in place for 54 years. Moreover, he waxed a new record for having the most simultaneous Top 40 Hot 100 hits with 14.

The vibe is just too hard to resist. A Post Malone concert ticket is truly a hot one! Go get 'em now!