Watch Manny 'Pac Man' Pacquiao goes head to head with Keith 'One Time' Thurman this 20th July 2019, 2 PM at MGM Grand Garden Arena. Who will be the champion for this legendary match of Welterweight World Championship? Be a part of boxing's history now! 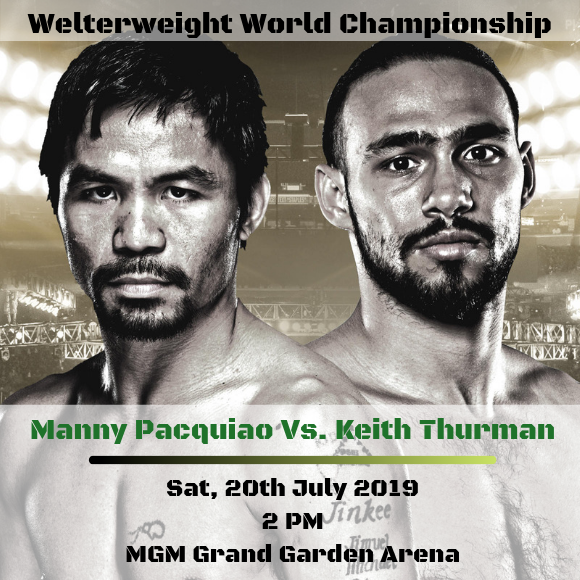 Who will win the top spot in one of boxing’s deepest and most talented divisions? The stakes are high this July 20th!

Will it be Manny ‘Pac Man’ Pacquiao, boxing’s only eight-division world champion, Philippine Senator and regular WBA welterweight champion? Or, would the champion be undefeated Super WBA Welterweight Champion Keith “One Time” Thurman in this powerhouse 147-pound showdown?

Pac Man has a record of 61 wins, 2 draws and 7 losses. He was named Fighter of the Decade for the 2000s by the Boxing Writers Association of America (BWAA), WBC, and WBO. He is also a three-time Ring magazine and BWAA Fighter of the Year, winning both awards in 2006, 2008, and 2009; and the Best Fighter ESPY Award in 2009 and 2011. In 2016, Pacquiao was ranked first on ESPN's list of top boxers, pound for pound, of the past 25 years BoxRec ranks him as the greatest Asian fighter of all time. Despite being in more advanced age, Pacquiao is not lacking in speed either power when compared to younger boxers.

Where else, Thurman will be walking up the stage with a record 29 wins, 1 no contest and 0 losses. Nicknamed "One Time" for his formidable knockout power, Thurman is considered one of the hardest punchers in the welterweight division. Keith Thurman represents the most dangerous challenger that the future Hall of Famer Pacquiao has faced in his recent ring appearances.

Be there to watch this match up at MGM Grand Arena, Las Vegas this 20th July at 2 PM and be a part of boxing history. Grab your tickets now!