Ladies and gentlemen, get ready for the bellydancing Spanish-speaking sensation that is SHAKIRA! On her 2018 “El Dorado,” world tour, she’s coming to the MGM Grand Garden Arena to wow the audience on Saturday 10th February 2018! A show that will undoubtedly leave you wanting more, get ready for a performance that will be the highlight of the year! Grab your tickets fast, before they go – hit the “Buy Tickets,” button above!! 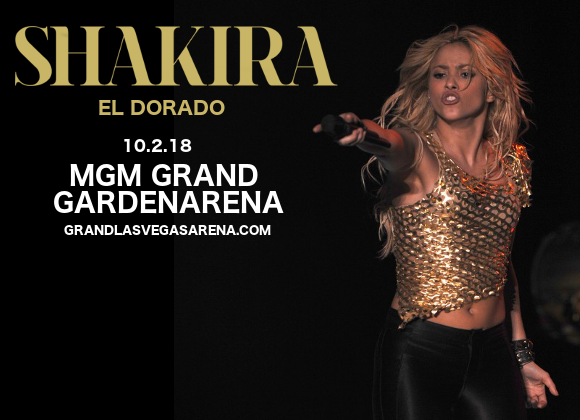 Shakira Isabel Mebarak Ripoll, born in Barranquilla, started showing promise at an early age, performing at school in a wide variety of styles from traditional Latin American to rock n’ roll. With her first major-label album, “Pies Descalzos” in 1996, she gained recognition in Latin America. In 2002, she released her first English-speaking album, “Laundry Service” featuring the hit single, “Whenever, Wherever”. In 2010, "Waka Waka (This Time for Africa)”, Shakira’s official song for the FIFA World Cup, became the best-selling World Cup song in history, as well as becoming one of the most-watched music videos on YouTube with over 1.3 billion views!!

Now, Shakira is taking her latest album, the fantastic “El Dorado,” on tour. Join her live for a dazzling performance that you’ll never forget!!