EVENT CANCELLED. Please contact your ticket point of purchase to claim a refund on your tickets.

The Black Crowes have reunited for the first time in six years, and they're headed to MGM Grand Garden Arena on Friday 11th September 2020 for a night of straight-up rock and roll to celebrate the 30th anniversary of the album that first brought them fame: Shake Your Money Maker! Fans will be delighted at the reconciliation of the band and the opportunity to hear such a classic album live in full once more!

“It’s always been our band and it’s funny through all the trajectory of the good and the bad — the joy and the frustrations,” frontman Chris Robinson said about his sometimes contentious relationship with his brother. “[Rich and I] were laughing, saying the one thing [we] can always agree on is, Shake Your Money Maker’s a good record.” 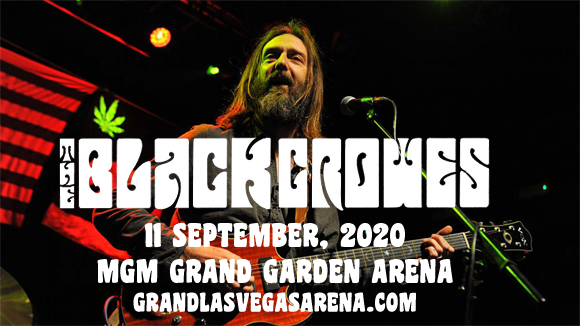 2020 marks the 30th anniversary of American rock band The Black Crowes' debut album, Shake Your Money Maker, and the group has reformed after a second hiatus (they parted ways from 2002 – 2005, and again in 2014). Released six years after the group formed, the album led to rave reviews from publications and that year the band was labeled by Melody Maker as "The Most Rock 'n' Roll Rock 'n' Roll Band in the World" and voted by the readers of Rolling Stone as 'Best New American Band'. Over the years, the band produced eight studio albums (including the number one album The Southern Harmony and Musical Companion 1992), four live albums and several hit singles.