Hot off the heels of 2019's "Millennium Tour" which brought together R&B and hip-hop boy band B2K, lead singer Omarion is now giving it a 2020 reboot and a new twist. "The Millennium Tour 2020" is all set to cover more ground with an expanded – explosive line-up. Headlining this tour is a "Face Off" between rap champs Omarion and Bow Wow. The showdown forges on with Pretty Ricky, The Ying Yang Twins, Soulja Boy, plus *Ashanti * — as the first female act, as they are bound to unleash a barrage of hits from start to finish! The Millennium Tour 2020 will hit the MGM Grand Garden Arena on Saturday 9th May 2020. Hot, hot tickets — grab 'em now! 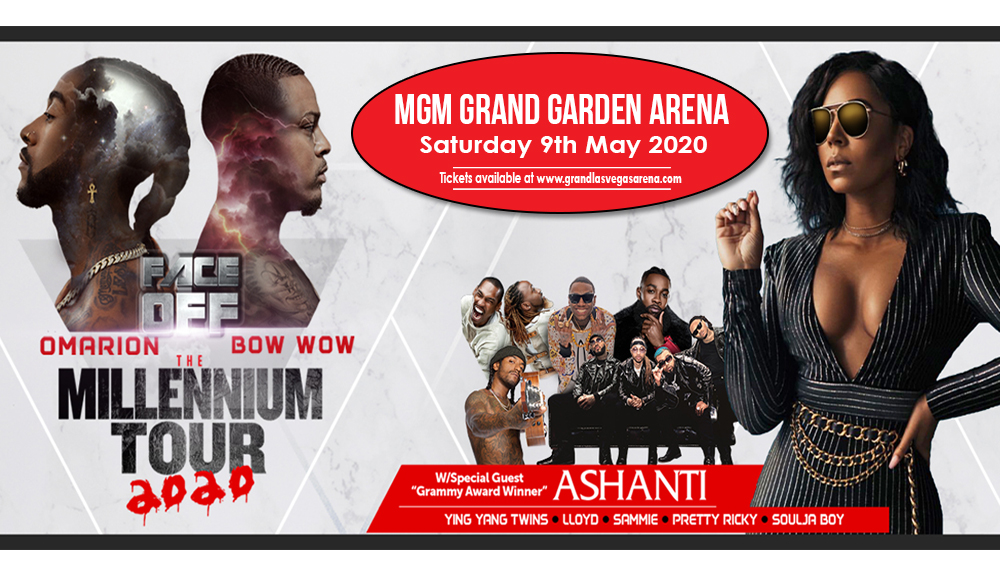 Omarion had his big wave of success in the early 2000s with singles like "Bump, Bump, Bump", "Uh Huh", and "Girlfriend", which all reached success on the Billboard Hot 100, as part of the iconic R&B hip-hop group B2K. As the group disbanded in 2004, Omarion had his own string of hits as a solo artist, lead by his signature hit "Ice Box", which reached number 12 on the Billboard Hot 100.

Now, Omarion is on to a new milestone. “2020 is my 20th year entertaining. Blood, Sweat & Tears,” tweeted Omarion. “Always giving you the best that I got. Thank you for growing with me.”

As B2K's 'Millennium Tour' faced some personal setbacks among the group members, Omarion took on the cudgels and carried on with "The Millennium Tour 2020". The tour features a headliner segment dubbed as "Face Off", where Omarion share top billing peformance with an equally quintessential rap artist "Bow Wow".

Support show-stoppers, namely Pretty Ricky, Ying Yang Twins, and Soulja Boy will also engage in a hit-after-hit-after-hit showdown. To neutralize that testosterone-filled vibe, lone female artist *Ashanti * will be there to provide sleek and silky grooves.